In the figure below, Alice applies for a driver’s license. As part of this process, Alice submits evidence of identity and qualifications to drive. Once the application is approved, a license is issued.

Later, Alice needs to cash a check at the bank. Upon presenting the check to the bank teller, the bank teller asks for ID. The bank, because it trusts the government agency that issued the driver’s license, verifies the identity with the license and cashes the check.

The public key infrastructure (PKI) is a combination of policies, procedures, hardware, software, and people that are required to create, manage, and revoke (when necessary) digital certificates. Similar to the concept of how a driver of a car can receive a license to drive, and that license because it is issued from a trusted agency can be used by others to validate the identity of the person who has the license, an identity digital certificate, issued by a trusted certificate authority (CA) , can provide similar functionality in the digital world of networking. On a bigger scale, digital certificates can be used for authenticating a specific user, system, or server, and going beyond that, the certificate can also be used as part of the protocols to establish an encrypted private session. This includes the root CA, intermediate or subordinate CAs, the registration authority, and certification revocation list (CRL) as required.

A key pair is a set of two keys that work in combination with each other as a team. In a typical key pair, you have one public key and one private key. The public key may be shared with everyone, and the private key is not shared with anyone. For example, the private key for a web server is known only to that specific web server. If you use the public key to encrypt data using an asymmetric encryption algorithm, the corresponding private key is used to decrypt the data. The inverse is also true. If you encrypt with the private key, you then decrypt with the corresponding public key. Another name for this asymmetric encryption is public key cryptography or asymmetric key cryptography. The uses for asymmetric algorithms are not just limited to authentication, as in the case of digital signatures dis- cussed in the previous sections, but that is one example of an asymmetric algorithm.

A PKI is the service framework that is used to support large-scale public key-based technologies. It provides the base for security services such as encryption, authentication, and nonrepudiation. A PKI allows for very scalable solutions which require the management of systems identities, user identities, or both, and is an important authentication solution for VPNs. A PKI uses specific terminology to name its components.

Two very important terms must be defined when talking about a PKI:

Many vendors offer CA servers as a managed service or as an end-user product: VeriSign, Entrust Technologies, and GoDaddy are some examples. Organizations may also implement private PKIs using Microsoft Server or Open SSL.

Here are a few standards you should become familiar with, which include protocols by themselves and protocols used for working with digital certificates:

Digital signatures are commonly used in the following two situations:

There are three Digital Signature Standard (DSS) algorithms that are used for generating and verifying digital signatures:

The signature process is as follows:

The verification process is as follows:

The example illustrates how the authenticity and integrity of the message is ensured, even though the actual text is public. Both encryption and digital signatures are required to ensure that the message is private and has not changed.

To achieve these goals, digital signatures have the following properties:

A PKI facilitates highly scalable trust relationships. PKIs can be further scaled using a hierarchy of CAs with a root CA signing the identity certificates of subordinate CAs. For simplicity, this discussion will present a single CA PKI.

Digital Certificates can be used for clients who want to authenticate a web server to verify they are connected to the correct server using HTTP Secure (HTTPS) , Transport Layer Security (TLS) , or Secure Sockets Layer (SSL) . For the average user who does not have to write these protocols, but simply benefits from using them, they are all effectively the same, which is HTTP combined with TLS/SSL for the security benefits. This means that digital certificates can be used when you do online banking from your PC to the bank’s website. It also means that if you use SSL technology for your remote-access VPNs that you can also use digital certificates for authenticating the peers (at each end) of the VPN. 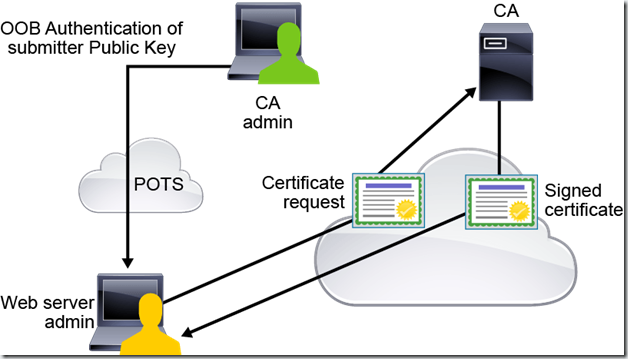 To obtain an identity certificate, a system administrator will enroll with the PKI. The first step is to obtain the CA’s identity certificate. The next step is to create a CSR (PKCS #10). The CSR contains the identity information that is associated with the enrolling system, which can include data such as the system name, the organization to which the system belongs, and location information. Most importantly, the enrolling system’s public key is included with the CSR. Depending on the circumstance, the CA administrator may need to contact the enroller and verify the data before the request can be approved. If the request is approved, the CA will take the identity data from the CSR, and add in the CA-specified data, such as the certificate serial number, the validity dates, and the signature algorithm, to complete the X.509v3 certificate structure. It will then sign the certificate by hashing the certificate data and encrypting the hash with its private key. The signed certificate is then made available to the enrolling system.

It is important to understand that the CA is not involved in the certificate validation process. Systems that need to validate the identity certificate of other systems will have the root CA certificate. They will use the CA’s public key to validate the signature on any certificate they receive. It is also important to understand that the certificate does not so much identify the entity of the peer. It only identifies the valid public key of the peer. To be sure that the peer is actually the entity that is identified in the certificate, a system must challenge the peer to prove that it has the private key that is associated with the validated public key. For example, a message can be encrypted with the validated public key and sent to the peer. If the peer can successfully decrypt the message, then the peer must have the associated private key and is therefore the system that is identified by the digital certificate.

Several methods can be used to check for certificate revocation. Currently, the most prevalent methods are CRLs and OCSP. The table lists benefits and limitations of each protocol: